There is no trick in how to pick the best gun safe, as there is a lot that has to be considered before making a choice. 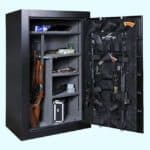 Will it protect its contents from an intense house fire?  Can it withstand an extended attack from burglars?  What locking and bolting mechanisms is it built with?  Will it hold an entire collection of firearms?  Again, there’s a lot to consider, but it’s worth putting in the research.  A reliable, stalwart security container can keep people honest, protect children from accessing the firearms, keep a valuable collection organized and assist with home defense.

How to Pick the Best Gun Safe 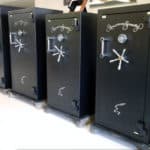 There’s no way around it – the first time is the hardest when it comes to selecting a safe.  There are multiple performance ratings associated with them, and the testing methods behind these ratings aren’t always clear.  On top of that, new buyers tend to make some critical mistakes in the selection process, so here’s what to look for when picking a gun safe:

Most safes can store both long rifles and handguns, with shelving designed to accommodate both.  Again, though, keep in mind the extra space that rifles with scopes and other attachments will require, and factor that in before making a purchase.

While there’s no single best approach in how to pick the best gun safe, sticking to these standards will help a buyer make the best decision.  In short, there should be no compromise with security, and as long as the safe comes from a reputable manufacturer, compromise should not be necessary.